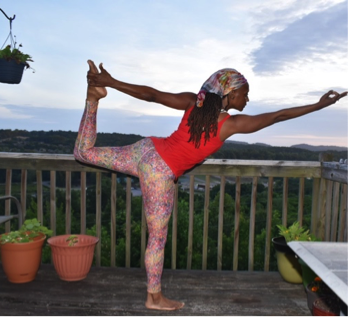 Kimberly Ayers has been a ‘helper’ for as long as she can recall. When she was a young child, she would accompany her mother to take food and clothes to those in need. She learned the power and importance of community organization as her family was involved in a tight knit community in Birmingham, in retrospect she realized this was out of necessity to establish and maintain a voice in a society that otherwise may not have heard the individuals in her community. Following in her mother’s footsteps even more closely, Kimberly became a nurse. This is a fulfilling career, yoga is a perfect pairing for her career and life. Kimberly began practicing yoga when a friend suggested she do so to help with stress and anxiety. Thankfully, she found her way to First Avenue Rocks where she would go before sunrise to practice with one of the most experienced, humble, patient individuals, Akasha Ellis. The discipline and focus required to practice Ashtanga is what she needed. Kimberly spent a great deal of time at the Birmingham YMCAs as her children were involved in activities.  This is where she practiced with Jacinta Sole who was taught by Stephen Fletcher.  Jacinta taught Bikram style yoga, Kimberly found the benefits were many. Kimberly has practiced for years and made it a point to visit at least one yoga studio in every city and state she travels. Exploring the various styles, forms, and flavors of yoga inspired Kimberly to learn more. Kimberly pursued formal training and began teaching immediately because in order to help others, it is essential to be knowledgeable, well trained, and set an example by giving self-care first. When she is not at the hospital or spending time with her family, she is teaching yoga in the community to those who may not otherwise have the opportunity to explore the many benefits of yoga including the physical practice.  Her teaching preference is Ashtanga, she also teaches basic flow and Yin upon request. She seeks discipline, self-study, and a moral/spiritual cleansing each day-Tapas.